We Are Sterling Cooper

We Are Sterling Cooper

State and federal governments spend nearly $450 million combined on advertising each year, more than large private companies such as Harvey Norman, Woolworths and McDonald’s, according to a study by the Non-Aligned Public Policy think tank, the Grattan Institute.

And nearly $50 million of the nearly $200 million the federal government spends annually on advertising is spent on politicized campaigns.

“The incumbent government is the most common way to politicize taxpayer-funded advertising,” says the study, New Politics: Depoliticizing Taxpayer-Funded Advertising.

“Many of the campaigns launched by government policies do not have a call to action that could justify them on public interest grounds.

“The $39 million Building Our Future campaign was designed to promote federal government investment in transportation infrastructure. But there was nothing specific that the government needed people to do. Instead, the campaign generated feel-good messages about the infrastructure pipeline.

“There were also no calls to action in the anti-trafficking communications campaign, used by the two main parties when they were in power, which included advertisements in Australian newspapers about the firm position of the government on boat arrivals.

“State governments do too. For example, the WA Bigger Picture campaign, which ran from 2012 to 2016, promoted government investment in infrastructure projects, such as upgrading a regional boarding school. .

“And the Queensland Government has spent more than $8 million on two campaigns in 2020-21 to ‘tell Queenslanders about the state’s recovery plan’.”

Analysis by the Grattan Institute shows the federal government’s 10 most expensive politicized campaigns: 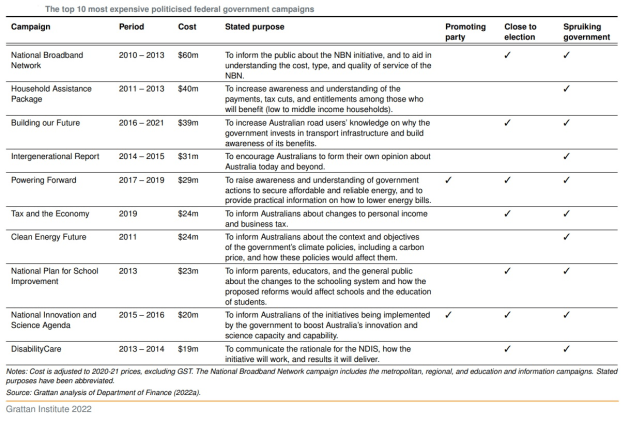 The Grattan Institute: “Australia’s federal and state governments should legislate stricter rules that limit the scope of taxpayer-funded advertising campaigns.

“Campaigns should only be broadcast if they encourage specific actions or seek to bring about behavior change in the public interest. Campaign materials should not promote any party or government.

“And campaigns need to be timed to run when they will be most effective, not to hunker down just before the election.”

Do you have anything to say about this? Share your opinions in the comments section below. Or if you have any news or a tip, email us at [email protected]